Check Out My Books!

From the publisher:
A gripping account of 1960s radicals who took up arms against the state

The arrest and subsequent imprisonment of Silas Bissell, former heir to the rug-cleaning fortune who was discovered living near Eugene, Oregon, in 1987, drew a line under one of the most spectacular and bizarre episodes in the historv of the American New Left, for it marked the official end of the Weathermen. Product of splits within the antiwar movement during the late 1960s, the Weather Underground would become synonymous with violent, clandestine resistance to racism and imperialism in the United States and, for some, a symptom of how the movement went wrong.

In the first comprehensive history of the Weathermen, Ron Jacobs narrates the origins, development and ultimate demise of the organization: its emergence from the Students for a Democratic Society; its role in the famous Days of Rage in Chicago during October 1969; its decision to go underground; the various actions it staged … and in some cases bungled -- during the 1970s; its role as goad to other left organizations to sustain the struggle against racism and imperialism; and finally its disintegration, as various members were either captured or surrendered. Drawing on a rich array of documents, interviews with participants and an unrivalled knowledge of the history of the New Left, Jacobs weaves a gripping tale, by turns inspiring and hair-raising … a fitting testimony to the serried adventures of Weatherman itself.

The Way the Wind Blew fuses the excitement of a thriller with an objective assessment of US 1960s radicalism. It is an indispensable resource for comprehending the recent history of the US left.Available for purchase at Amazon and many other fine stores. 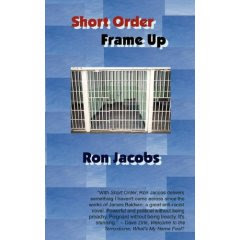 That's the title of my new novel. Published in June 2007 by Mainstay Press, it's set in 1975. America has lost its war in Vietnam and Cambodia. Racially-tinged riots are tearing the city of Boston apart. The The politics and counterculture of the 1960s is disintegrating into nothing more than sex, drugs and rock and roll. The Boston Red Sox are on one of their improbable runs toward a postseason appearance. In a suburban town in Maryland, a young couple is murdered and another young man is accused. The couple are white and the accused is black. It is up to his friends and family to prove he is innocent. This is a story of suburban ennui, race, murder and injustice. Religion and politics, liberal lawyers and racist cops. Short Order Frame Upis a piece of crime fiction that exposes the wound that is US racism. Two cultures existing side by side and across generations—a river very few dare to cross. His characters work and live with and next to each other, often unaware of the other's real life. When the murder occurs, however, those people that care about the man charged must cross that river and meet somewhere in between in order to free him from (what is to them) an obvious miscarriage of justice.

The case against the young man has many flaws, but the racism of the cops and the system makes it easy for them to ignore those flaws. It's only when a radical political group and a minister get involved that the media begins to wonder if the charges are valid. All the while, the friends of the accused and the dead couple are searching their own selves and motivations; and the cops are trying to extract a confession from they man they locked up.

Short Order Frame Up is a crime novel where the crimes are committed not only by those on the other side of the law. Rivetingly told and well-placed in its time, Jacobs' novel is a commentary on America's legacy of racism and a story of suburban malaise gone horribly awry that you won't want to put down until you're done with it.

Available for purchase at Amazon and many other fine stores. Also, if you hurry, I have a few copies for sale that I can sell direct for $12.00 US shipping included. Just email me at ronj1955@gmail.com

"Ron Jacobs has created a working-class brew of language and music, a quasi-bitter, semi-sweet world of weed and sport, of love and violence, of not-so-innocent innocence up against the walls of racism and power. A compelling story, alas, and an underlying reality of life in America." -Marc Estrin, author of Insect Dreams: The Half-Life of Gregor Samsa; Golem Song

"With Short Order, Ron Jacobs delivers something I haven't come across since the works of James Baldwin: a great anti-racist novel. Powerful and political without being preachy. Poignant without being treacly. It's stunning." - Dave Zirin, author Welcome to the Terrordome; What's My Name Fool?