Johnny Appleseed Gets a Comic Book

From Ginsberg to Gonzo

Sinking in the Swamp

The swamp is not being drained. It is becoming more toxic by the day. It is now ebb tide at the pig farm and the sewage is in the pool where your children go to swim. 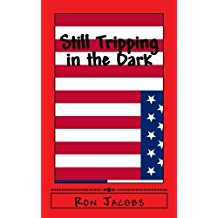 For sale via online booksellers or through special order at your favorite bookstore......
Posted by jron at 8:45 AM No comments:

Email ThisBlogThis!Share to TwitterShare to FacebookShare to Pinterest
Labels: All the Sinners Saints, books, Capitalism is the Problem, Co-Conspirator's Tale, Counterpunch, Daydream Sunset, short order frame up, The Way the Wind Blew, Tripping Through the American Night

Private Property Does Not Equal Freedom

Review of All the Sinners Saints by Michael Schiffmann

translated from the German

The Missouri Compromise and General Kelly

A look at the Liberation Music Collective's latest release....

Stop the Idiocy! Stop the Mattis-ness!

The (revised) toll in lives was: 36, 546 US soldiers, an estimated 1.5 million Koreans on both sides of the parallel (mostly civilians), 200,000 Chinese soldiers, and another 4000 soldiers from armies that allied themselves with the United States.  In addition, there were more than one million wounded and/or missing.

The link below goes to an article I wrote for the previous print edition of Counterpunch magazine.  I am sharing it in the hope that some of you who read it will then subscribe to the print version of Counterpunch.  Why should you do that since you can read Counterpunch online for free?  Because most of the articles in the print issues are not reprinted online is a good place to start....

If you want to subscribe, here is a link to do that.....
https://store.counterpunch.org/subscribe/

Thanks,
Ron
Posted by jron at 8:54 AM No comments:

Sharpening the Contradictions from the Fifty Yard Line

When I used to watch Bart Starr, Johnny Unitas and Joe Namath throw the ball back in my earlier years, it seemed most NFL players were white.  They were also assumed to be very patriotic and supportive of the US war on Vietnam and in favor of the more conservative side of US politics.  Whether or not this was as universal as it seemed to be is hard to say since NFL players were not known for expressing their political views in public.

Colonialism Never Gives Away Anything for Nothing

The Year of the Hippie Dream

We Want the World and We Want it Now!

Dylan and Woody: Goin’ Down the Road Feelin’ Bad

Enforcing the Red Scare—From the FBI to the VA

I Was Born Here, So What?

Gonna' Have to Face It, You're Addicted to War

Andrew Jackson and the American Psyche

Nazis and Racists I Should Have Punched

A Century of Socialism

The Deep State is the State

Just because a general has a new way to fight a war doesn’t mean that war should be fought. The war in Afghanistan is not being incorrectly waged. Instead, it is the war and occupation of Afghanistan that is wrong.

Housing for People, Not for Profit

Interview: US War Industry Profits from a Long War in Syria

Hate Speech as Free Speech, How Does That Work Exactly?

One Hundred Years That Shook the World

It’s as if John Reed, author of the classic piece of revolutionary journalism, Ten Days That Shook the World, woke from a decades-long sleep to tell the story of 1917 once again.  Although there is less personal detail, the sweep of Miéville’s story is equal to Reed’s in its breadth while matching it in passion.  It is Reed’s contention that the masses of workers, peasants and soldiers were at the front of the revolution.  One hundred years later, Miéville’s telling agrees.

Syria: Beyond Western Myths and Half-Truths

A book about history that is ignored by so many....not meant as an endorsement of Assad and his army but certain to be taken that way by those unwilling or unable to look at the broader picture...

Is There Anything Left to Us But to Organize and Fight?

This isn't reason.  It is madness.

Music is Love, Music is Politics

Islam: A Conversation on Paper

"Mourad and Anderson recently published a book titled The Mosaic of Islam: A Conversation with Perry Anderson. It is a text with a grand mission: to introduce and inform non-Muslims of the history, and philosophical underpinnings and debates that make up the Islamic religion.Despite its rather small size, the book manages to succeed in its task."

Empire in Crisis: “I Did Not Have a Meeting With That Envoy!”

The Realist: Irreverence was Their Only Sacred Cow

Revolution and the Color Line

Fomite Press, which published my novels (so far) has begun a political pamphlet series.  Here is their explanation of the project:
"Given the exigencies of the time, Fomite would like to step outside its normal literary publishing practice, and add to its offerings a series of bound pamphlets on urgent political, social, cultural, and organizing issues from a radical, anti-capitalist viewpoint."

The titles are interesting and provocative.  My contribution to the project is titled Capitalism: Is the Problem...

Here is a link with more information and ordering details:
http://www.fomitepress.com/Tracts.html
Posted by jron at 12:36 PM No comments:

As far as Bannon is concerned, a better comparison would be this: Steven Bannon is to Donald Trump what Josef Goebbels was to Hitler.

If we don’t stand up for the rights of immigrants, who will be the next target of the forces now in control in Washington, D.C.?

A Scheme is Not a Vision

If the bedrock of Trumpism is total allegiance to his version of the American state, the bedrock of our politics should be total opposition to Trumpism.

Singing the Body Electric Across Time: A Review of Rebel Crossings.....