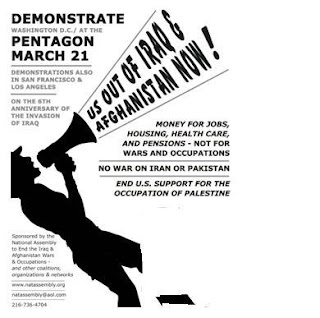 As Barack Obama's troop escalation begins in Afghanistan and talking heads debate how many more troops the US should send, the leadership of what was once the largest antiwar organization (UFPJ) in the United States rejected a call for a unified antiwar protest on March 21st, 2009. Instead, they issued a call to go to Wall Street on April 4th, 2009 and encourage the war profiteers to move "beyond a war economy," while toning down the demand to end the wars and occupations now to a demand to merely end them. Like antiwar organizer Ashley Smith told me in an email: "(That is) something Dick Cheney could support." The implication of this call by UFPJ is that now that Barack Obama and the Democrats are in power, there is no longer any need to protest against war. Not only is this incredibly naive, it is downright dangerous for the future of the world.

As anybody who has paid the least bit of attention to the nature of the US economy over the past century, its very foundations rest on the production of war and materials for war. Also apparent to those of us who have been paying attention is that the Democrats are just as responsible for this reality as the Republicans are. Just because George Bush and his administration were personally reprehensible and their arrogance and disregard for principles most Americans hold dear was as obvious as the nose on Pinocchio's wooden face doesn't mean that the policies of the Democrats are substantially different.

Consequently, the antiwar movement would be foolish to think they have a government of allies in Washington, DC now. There may be a more personable bunch of folks ruling the country now, but the odds of those folks pulling out of Afghanistan or Iraq now instead of later without a major push from the American people insisting that they do so are about as poor as they were under the Bush administration. The time for the antiwar movement to demand that the Obama administration end the occupations of Iraq and Afghanistan is now, before its political ego becomes entangled in a military exercise that is ill-advised, poorly done, and just plain wrong.

Walking through New York's financial district carrying signs expressing a hope that the trillion dollar war economy will go against its profit margin because it is morally wrong to profit from death is not a bad thing. It might feel good and even change some minds, but it won't change the bottom line. And it is the bottom line that must be changed. Understanding this fact requires the antiwar movement to be united and specific. The demands are simple: Bring all of the troops back from Iraq and Afghanistan now. Not in 2010, or 2011 or 2012, but now. Both of these operations have gone on long enough, no matter what the generals tell Obama or the American people. Since the Pentagon hasn't been able to accomplish what it wanted despite being militarily engaged for close to a decade in both countries, it's high time that we insist that our timetable be put into effect.

Fortunately, a coalition has formed around this simple demand. The National Assembly to End the Wars and the ANSWER coalition have joined forces and are holding protests in at least three major US cities on March 21, 2009. Washington, DC, Los Angeles and San Francisco will be the sites of these protests. In addition to calling on the Obama administration and Congress to remove the troops from Afghanistan and Iraq now, the protests also address the issue of US support for the violent occupation of Palestine by Israel--another important issue that the UFPJ prefers not to highlight in their public calls to join their protest.

Unless and until the issue of Palestine is addressed in an honest and just way that does not merely echo the desires of the Israeli expansionists, things in the Middle East will remain volatile and dangerous. According to most public opinion polls, the majority of Americans understand this yet Washington continues to support Tel Aviv no matter what it does--murderous attacks on Gaza or illegal settlements in the West Bank, it doesn't seem to matter. The US money and weaponry continues to flow. Additionally, in the wake of recent election results in Israel, the threat of an Israeli attack on Iran (with at least tacit US support) grows stronger. Unless the US government is put on notice that this is beyond the pale, the current relative calm in the Middle East and South Asia will become a thing of distant memory.

It is not my intention to disregard or disrespect UFPJ's march on April 4th in New York. Indeed, if one can attend that protest and one of the protests on March 21st, please do. However, if one has to choose, the intentions of the March 21st protests are certainly more immediate and, if the world without war that UFPJ envisions is to ever occur, essential to that vision. After all, in order to move beyond the war economy, doesn't it make sense that we must end the wars/military occupations currently taking place? If we don't get this message out there, those who want to expand the war in Afghanistan and ultimately bring it into Pakistan on a much greater scale will assume they have the approval of the US public. The job of the antiwar movement is to let them know that this is not the case. March 21st, 2009 is the first national manifestation of this in the Obama era..

Obama Bowing to the Masters of War?

The American people did not elect the Pentagon. They elected Barack Obama based a good deal on his promise to get US troops out of Iraq sooner rather than later. Since he was elected, Mr. Obama has hedged on this promise. Since he was inaugurated, the Pentagon and its civilian boss Robert Gates have hedged even more. Now, they insist, US troops should remain until the Iraqis hold a national election that is as of today not even scheduled. Then, even after that election is held, the departure of some US troops should depend on the outcome of the election. In other words, the Pentagon and Defense Department are telling Mr. Obama that no US troops should leave Iraq unless the election results meet the expectations of Washington.

This is exactly why Robert Gates should be removed from his position. Just like the American voters did not elect any of the generals pushing for a continued occupation of Iraq, neither did they elect Mr. Gates. His continued presence in the halls of official Washington is an ugly reminder of the destructive, disastrous and disavowed policies of the Bush and Cheney regime now in exile. It is bad enough that even if Barack Obama overrides the Pentagon and Mr. Gates and sticks to his sixteen month withdrawal plan there will still be around fifty thousand US troops in Iraq. This is because Obama's call to bring all troops home from Iraq that began his campaign somehow morphed into a call to bring home only those troops determined to be "combat troops." This categorization involves a constantly changing number of troops and is a definition that seems to fluctuate at the whim of Generals Petraeus and Odierno.

No matter what, it is not what millions of US voters voted for on November 4, 2008. It is also why those millions have no reason to give Mr. Obama an inch of slack on this issue. If he won't stand up to those men and women that insist on carrying out the policies of his predecessor, then Mr. Obama deserves to hear that from those voters. Democracy in the United States didn't end with Obama's inauguration. Indeed, the time to exercise one's voice and raise it in opposition to the actions and policies of the elected government is when it actually starts to govern. Unless the Obama administration is held to the fire on its promise to end the Iraq war and occupation within 16 months, it is unlikely that it will end then. Furthermore, the likelihood of all troops being out of Iraq by 2011 as promised in the Status of Forces Agreement signed in 2008 diminishes, also. After all, what motive would there be to end the occupation in 2011 if there is no demand from the American people that the Obama administration stick to its promises regarding Iraq?

Many US voters across the spectrum believe that Mr. Obama deserves a little time to establish himself as president. Give him a few months, they say. While this is a worthy and magnanimous gesture, it does not apply to the military operations in Iraq and Afghanistan. Both of these operations have not achieved their stated goals and the continued killing of local citizens by US and their client forces will not achieve those goals in the future. To pretend otherwise is pure folly and defies the basic facts of the past eight years. A good part of the reason the violence in Iraq has died down lies with the expectation that US forces will be leaving soon. There are other reasons, including the security clampdown across the country and the sheer fact of a population exhausted from conflict, but a substantial reason for the lull in violence is the hope that with the US leaving there will come a new Iraqi sovereignty and some kind of genuine peace. This hope can die very quickly if the resistance forces inside Iraq come to believe that the US intends to stay.

As for Afghanistan, the seven years of US war and occupation of that land has done nothing but further destroy that broken nation's infrastructure, increase support for the Taliban, enhance the production of opium, and stifle the nascent movement for better treatment of women and children. That's just the obvious failures of this ill-informed mission. There was never a good reason to invade that country in the first place. The motivation for the original attacks was revenge, plain and simple. There was little or no connection between the thousands of Afghan civilians killed since that first attack and the forces that killed thousands in New York and Virginia, but the people in Washington wanted blood so they went after Afghanistan. There is no reason to continue the killing. It is time to stop. Washington can trade partners and install a new regime that won't criticize US air raids, but it can not change the fact that its battle in Afghanistan will drain the swagger from the US empire just as it has done to the Soviet and the British empires before it.

There are at least two antiwar protests coming up in spring 2009. If Barack Obama is not taking the path towards peace that he was elected to take by then, it is essential that those who voted for him with the understanding that US troops would be leaving Iraq (and not going to Afghanistan) attend at least one of these protests. That is what democracy really means.